Posted on November 6, 2019December 9, 2019By Webmaster
Posted in Fishing Articles

As a line fisherman from the past (1952-1962), then occasionally, until I voluntarily gave up my commercial licence in 1992, I frequently got a little miffed at been called “irresponsible and greedy” because of the amount of fish we used to catch. Matters were very different in those days. I have also wondered many times whether young men still have meaningful adventures anymore. It is hard to conceive today that in our youth all we had to listen to was the radio, or infrequently go to the cinema, so we all had to make our own recreation without TV, Play Stations, Computers, not even a calculator. Yes it was a very different world then, with nobody worrying whether anybody would be molested or attacked. Cars were left with keys in the ignition, and locks on front doors were really mainly ornamentation.

I was allowed to go fishing on my own, as long it was within sight of the stoep at my parent’s or granny’s house in Gordon’s Bay, on the rocks amongst the waves, at the age of six, sixty three years ago! At eight, I and my friend Richard were regularly sent out onto the Breede River, in a clinker built wooden skiff with a one and a half horse power Seagull outboard, to catch the fish needed for supper. Again providing we stayed more or less in sight, there were no other restrictions. My goodness, I still worried about the safety of my sons at the age of sixteen as to whether they might drown themselves on the same Breede River. Who are at fault, only we through the anxiety that has built up in this modem age? Of course the environment is today very different, and it is these differences that may make some of those actions seem irresponsible. 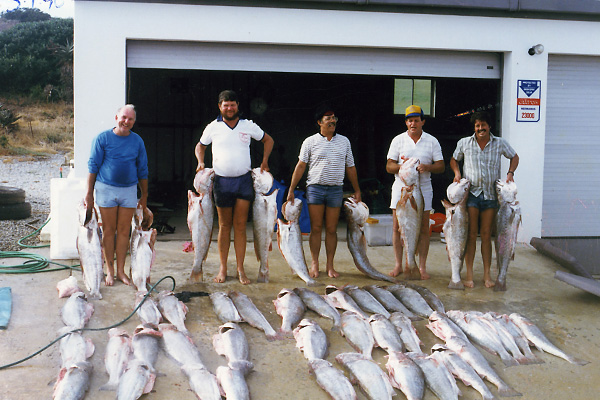 An all-night haul at sea off the Breede River Mouth

From the age of twelve I did not need pocket money. Providing I could get a lift to the rocks or a “site” on “oom se Toktokkie”, I made more than enough for myself. In fact it was six years after I started work that my income from that work exceeded for the first time my income from fishing. Was I irresponsible? I do not think so. I was simply a young adventurous fisherman. I well remember those days when first I had variety of dinghies, and then the first ski boat ever to grace the waters of False Bay, or, for that matter, any waters in the Cape. A Warrant Officer Smith brought it down from Salisbury Island in Durban, and “man it was made from tempered hardboard nogal;” not even ordinary hardboard. It weighed a ton, and eventually it surfed in front of a large swell with two eighteen horsepower outboards at 2 o’clock in the morning, probably producing one of the most frightening moments of my whole life.

In the middle sixties I became a really serious fisherman, gaining my skipper’s ticket of over 100 tons, catching sardine, anchovy, and the like from the pelagic shoals off our West coast and the South West African coastline, earning probably more money, relatively speaking, than I ever have since. Why did I do it? Because I love the sea, fish, and fishing. I love to understand where they come from; where they go to, and finally, in those years, I decided that the sea’s riches were not everlasting, as I think we all thought then including many of our scientists. So I became all for conservation. The seventies were the years when we first began to worry about sustainability; worrying that we were catching and killing too many fish; worrying that bloodlust and sport did not really go hand in hand. It was also the time when we realized it was more sporting to fish with light tackle, and in many ways more rewarding. Yet today we realize that even light tackle may not be very good for the fish in the catch and release era.

How the pendulum swings. In my youth I used blooded hemp line, with a breaking strain of about one hundred pounds, as a hand line to catch most of my fish. Sure in the estuaries and on the rocks it was rods with huge center pin reels, weighing it seemed half a ton, but nothing like the extraordinary equipment they still use up there in KZN! From that we went to nylon, became conscious of the fact that the thinner the line the better the fish bit, until competitions off Hout Bay for tuna often saw people fishing with 2kg and 4kg lines, let alone 8kg and 10kg.

I was lucky enough to be one of the first, thanks to the likes of Hymie Steyn, to adopt this method of fishing. When we changed our rules so that the lighter the line the greater the points, did I have a head start! After all I had fished with light line in estuaries and gullies since a teenager. My knowledge of light tackle fishing in the gullies of the Western and Southern Cape had come thanks to a remarkable fisherman, Willy Moorees, one of the most skillful, hard-working, and successful anglers it has ever been my pleasure to know. I met him first at Hermanus, where he was a sergeant in the SAP, when I was about twelve. He caught fish that most of us, even in those days, only dreamed about; with the first light rod and American reel I had ever seen. He was the first person, together with my step grandfather Hennie Otto, to suggest to me that it was not necessary to catch more than you needed to eat and give to your friends.

I was born to that first generation to enjoy the “great peace” in this world, which, despite all the problems we face, has endured, as seldom in history, for over 50 years without a major world war. The question I must ask myself, however, is whether the peace of the last 50 years, has been any better than the major wars that abounded in the centuries before. A hard question to answer when one looks at places like Libya, Syria Iraq, Vietnam, and even Korea.

I would ask those fishermen of my generation: ”Have you forgotten those wonderful runs of white steenbras in the Breede, or kob off Infanta, when you caught many and in the evening paid for everybody’s drinks at the pub from the proceeds”? Was that not a special type of adventure and excitement that we must deny our modem youth? I did not ever dump any fish. I sold them. Did I do damage? Oh yes, with hindsight, maybe, but I was not aware of it, nor irresponsible. And the memories of some of those days have lived with me my whole life, and probably will last into the next. Did we do it every day? No of course not! It’s just that, with the passage of time, everything gets compressed, and you remember, as human nature does, the good days long after the bad or ordinary ones have been forgotten.

More than 60% of the site’s content is FREE, though a number of premium articles are accessible at a small charge, or available in full for an annual subscription of R460.