BY-CATCH is to environmentalists almost as emotive a subject as seal culling. This applies to all types of fisheries, though perhaps the major emphasis has been on oceanic set netting, so called walls of death, and on inshore prawn trawling. As much as there are good reasons for the emphasis being placed on these specific types of fishing, there are equally many instances of generalisation that are totally invalid. For instance, it is actually a fact that oceanic set netting probably produces one of the lowest levels of by-catch. Were it not for the species that can on certain occasions make up such by-catch, seals, dolphins, turtles, and birds, it would be hardly worth measuring, and is far exceeded by other traditional forms of fishing such as seine netting or bottom trawling. 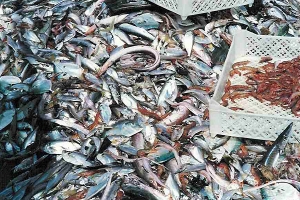 In the case of the by-catch of shallow water prawn trawling, depending on the area, there is absolute relevance in criticising the proportion of so-called trash fish rejected, relative to the weight of prawns retained. However again the matter is over generalised, and the experience in the Gulf of Mexico and the Mississippi Basin is accepted as the norm. In fact by-catch ratios vary tremendously according to the situation of the prawn fishery. One of the heaviest I have ever encountered was in Liberia, where the by-catch ratio was between 15 and 20:1. However a good 50% of that by-catch was high-class edible fish, and the non-edible component was probably not higher than 10%. The other 40% was made up, as is so often the case, of juveniles. However, in Liberia this was a very necessary, fully utilised source of protein for the population. In fact in Africa, South America, and in many areas of the Far East, the relevance and presence of the juvenile component is an extremely important socio-economic factor of the catch.

In Mozambique for instance, if the by-catch proportion increased tenfold, the demand for the edible component thereof, being fully 90%, would still far exceed supply. In South Africa the by-catch ratios are not high, though the demand for the juvenile fish, making up some 75% of it, is low. However, with the advent of very high levels of urbanisation over the past few years, and the differing approach to the country’s socio-political problems, one can already sense a distinct change in this attitude. On average its value in Africa is $0.50 a kilo. It is probably lowest here, and highest in Liberia, Sierra Leone and Ivory Coast. It is much sought after in all of the East African countries, and its importance, as a high protein food, should not be under-estimated. Nor should the circumstances here, be compared with the dumping of by-catch in North America and Australia. The world’s ecologists have a tendency to do this without taking into account the abovementioned socio-economic differences. There, the need for by-catch exclusion technology is a very relevant and an important development. Where, however, there is a need for it to enter into the normal food chain of the population, relevant to the natural mortality rates of juvenile fish, it is questionable whether or not it should not be construed an important contribution from the fishery in question, rather than a negative factor.

“By-catch for locals” is as appropriate a cliché as “horses for courses.”

There are no comments